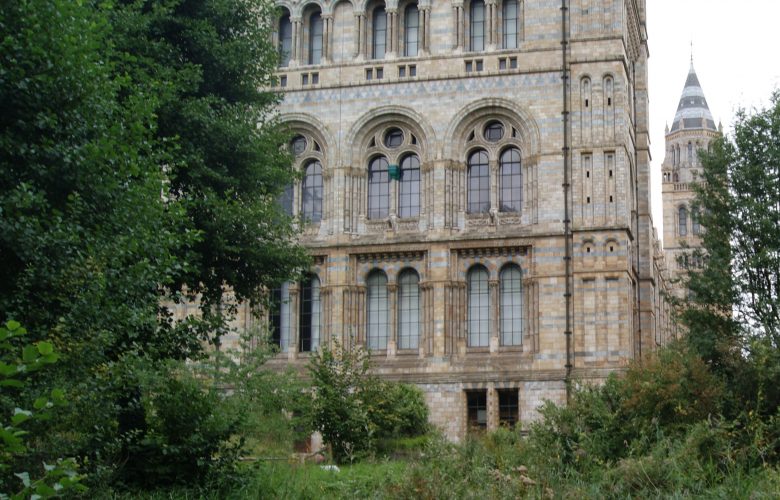 The Natural History Museum is housed in a mind blowing purpose built building that opened in 1881. Funded by the British government to showcase the collections of Sloane, Cook, and others, and to demonstrate the British superiority in the field of exploration and science, this building was designed to inspire awe in those who visited. The original budget in 1873 was a staggering £500,000 (£49,889,423 in 2016 calculated by Bank of England) but was reduced to £330,000 by the First Commissioner of Works, Mr Acton Smee Ayrton, who kept a tight control over the budget on behalf of the government. He did this by replacing the proposed lead roof with slate, and wooden ceilings painted with colour and gold leaf with more simple painted plaster. One hundred and thirty six years later, the building certainly retains that level of overwhelming grandeur. Covered in blue and yellow terracotta tiles, the building is intricately carved with flora and fauna on every pillar, staircase, and external surface. Inside the grand hall, a magnificent blue whale skeleton hangs. For lovers of the natural sciences, and of architecture, this is a must do.

We arrived nice and early, and were able to be in the first wave of people going in. The museum is free, and they restrict the number of people inside to ensure everyone gets to see everything fairly. To be honest, the grandeur of the building overwhelmed the displays inside. For an Australian family, the creepy crawlies display was dull with only local insects and none of the exciting ones we have at home. The dinosaur display stood out as being the best, with many specimens from across England and Canada, all displayed to full advantage. I particularly liked the treasures section, with the Museums most interesting and valuable pieces in one room. This included a first edition of Charles Darwin’s Origin of Species, and a tooth and jawbone of a dinosaur discovered by the museum’s first female scientist Dorothea Bate in 1902.

Another fascinating display was the original bird display from when the museum opened. It highlighted the way the Victorians thought about science, and the natural world.

We had morning tea in the wilderness garden, meandering around the small outdoor space with a variety of trees, undergrowth, and two sheep. Naturally, we concluded our visit to the museum with a late lunch in a pub, going to the nearby The Gloucester Arms, which had the identical menu to The Redan. It is now our mission to hunt out independent pubs.