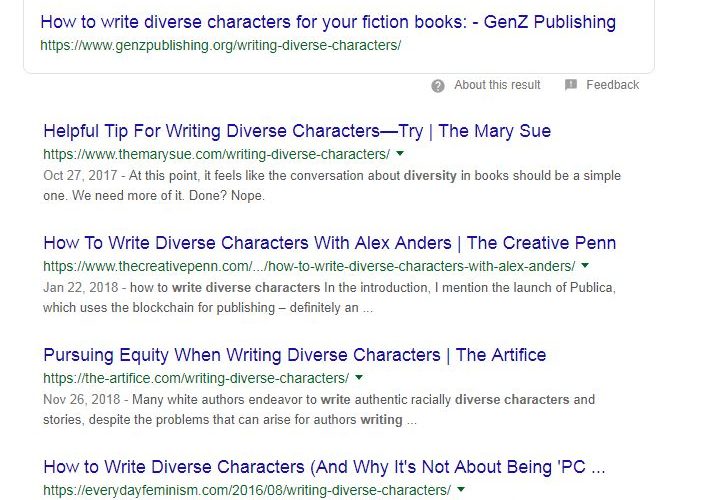 For several years there has been much debate about who is ‘allowed’ to write what. This is, in my opinion, a misrepresentation of the entire diversity discussion, and one that is often used as a justification for writers who don’t want negative feedback on their awful stereotypical writing. Anyone can write anything. Let me repeat that:

Anyone can write anything.

The key to this discussion is that any reader can (and should) discuss when a character is harmful to them. If a writer chooses not to listen to that discussion, they end up in the circle where they are almost guaranteed to write an identity poorly. Why? Because they aren’t listening to the people who are hurting. This cycle then leads to writers (particular white writers) who cry out that they can’t win. If they write an all-white, straight, abled world, then they are erasing people; but if they write diverse characters, they get called out for poor representation.

The answer is somewhat obvious (if you aren’t an asshole) – use empathy and do your research. Avoid an all-white, all-straight, all-abled world, and treat characters who aren’t white and/or aren’t straight and/or aren’t abled (etc) with empathy. Treat them like the real people they are. There are tons of resources online for writers who want to write an accurate (diverse) world, such as Write With Color, or simply use an internet search engine like you would with any other research topic. 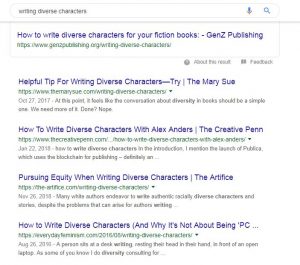 Given that I’ve written many characters who aren’t like me (white cis-bi woman), I thought I’d expand a little on my own processes for researching a character who has a different identity to myself. This is my process. Other writers will have their own processes, and I reiterate – anyone can write anything (they can also be criticized).

Firstly, I must be friends with at least two people who share that identity.

I’m rather fortunate that I have a wide circle of people in my day to day life. With four kids at two different schools, there is a large parent circle, as well as various sport teams (and the parent groups don’t tend to overlap between school and sport). At our local primary school, the parents speak over 50 different languages. I work as a self-employed writer for two magazines, and volunteer for both Romance Writers Australia and the local cricket club. I live in a diverse suburb, and have friends of many different ethnic backgrounds. Being queer means I also have many queer friends. All of my choices (for characters) come from the rather simple notion of wanting to see the real, diverse, world that I live in reflected on the pages of my books.
By ensuring that I know at least two people in my real life who share an identity with a character helps me see the identity as part of their whole character, not as a monolith or stereotype. Just as one romance featuring a white billionaire hero doesn’t represent every white billionaire, neither should a romance featuring any other type of character description attempt to represent everyone.

Secondly, I read a lot of books by #ownvoices writers who share that identity (preferably in romance and in non-fiction, but also wider across other genres).

There are two reasons for this, well, three if you count the fact that I love reading! By reading a lot of books by #ownvoices writers, I get to read a wide representation of an identity (see prior point about avoiding a monolith). The biggest benefit is that I get to boost authors who share an identity with my character. By buying their books, I am helping grow the diversity of writers in the publishing business, something I’ve written about a few times in the past. Here and here, for example.

Thirdly, I do a ton of research on stereotypes, so I understand how to avoid harmful tropes.

This one doesn’t really need an explanation. Learn what hurts people and avoid it. Think about how a character might be seen by a reader. Ultimately – don’t be an asshole and try your best not to harm people. A good book to get an overview of many issues is:

For example, simply understanding that being white in western society is a position of privilege. I don’t have to think about race on a daily basis. I’m seen as the default. I might have struggles in other areas, because I’m bisexual, or a woman, but that doesn’t give me automatic understanding of racial issues. I would hope that my own marginalization gives me empathy towards others, and provides a solid base to learn from. Being empathetic and learning to listen is a life-long process. I have made mistakes during this journey, and I am grateful to everyone who has helped me grow and learn.

Lastly, one of the most important parts of this process, is that I pay a sensitivity reader who shares the identity of my character.

Regardless of the work and research that I put into a character, my own internalised biases are likely to come out in my writing. Everyone has biases – if you think you are without bias, then you are lying to yourself – and the use of a paid sensitivity reader is a strong way of finding them. It’s always good to have more eyes look over a book before it goes out in the world – that’s why people have beta readers and editors. Using a sensitivity reader adds one more layer to help make a book better and stronger.

Check out my recommendations page to see a list of books I’ve enjoyed by a wide range of authors.

If you want to see what books I’ve published, check out my books page.