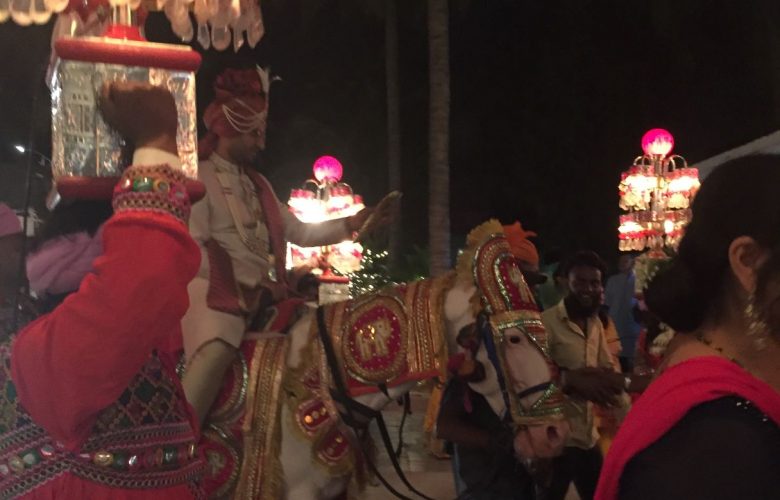 Mr Dahlia and I were thrilled to be invited to our friend Karan’s wedding in Bangaluru, India. Read the first part of our adventure here. 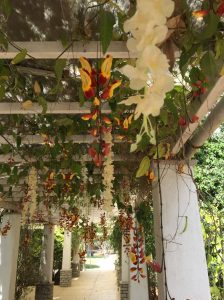 The wedding itself took place over three days; Saturday evening, all day Sunday, and Monday morning. Both Karan and his bride, Keerthi, grew up in Melbourne, and over the course of the three days, Mr Dahlia and I met people from many different countries. India and Australia had the highest representatives, while other countries included Oman, Malaysia, Singapore, and United Arab Emirates (Dubai). The people at the wedding were so friendly, and Keerthi’s huge family had all the elements I grew up with as part of a big family. Bossy uncles, so much negotiation between different family members, and most of all, laughter and love when everyone meets in one place. The wedding itself was a blend of South Indian traditions and North Indian traditions, and several of the aunts and uncles took the time to explain each part to everyone. Everything was done in three languages; Hindi, Tamil, and English. Some of the ceremonies were traditional South Indian ceremonies, while others were North Indian based, and a huge amount of organisation had gone into making sure both the bride and groom’s families were included in the whole wedding. One aunty told us that she adored how the music was done in the opposite language for each section, eg, if part of the wedding was done North Indian style, then the music was in Tamil, while the opposite applied for South India style sections of the wedding. The thought behind that to ensure both families understood each portion of the wedding is so inclusive and beautiful.

Not many people from Karan’s family made it to the Sangeet on Saturday night (many arrived on the Sunday for the rest of the ceremonies), and Mr Dahlia was asked to do a quick interview so the attendees could get to know him. Mr Dahlia coped well with being thrown into the spotlight suddenly, and the stress over what he’d said was quickly removed when one of the people we were having dinner with said, “I couldn’t understand your Australian accent, but I’m sure whatever you said was good.”

Sunday was largely religious ceremonies in the morning, although the North Indian Haldi (Turmeric Ceremony) just before lunch was so much fun. Family and friends ‘apply’ a turmeric paste to both the bride and groom to bless the couple. It was very messy, with much laughter and joy.

Karan and Mr Dahlia after the Haldi

The “Two States” cricket match after lunch. Basically a game of backyard cricket played between representatives of the bride and groom’s families. Most of the game was a few uncles declaring the backyard rules and telling people which team they should be on, and who was doing what. I batted okay, but bowled terribly, while Mr Dahlia did well at both with many jokes about him being an Aussie cricketer!

The Baraat – Saturday evening was the groom’s procession. Imagine two competing drumming bands, a horse, and dancers all in a two hour parade, all followed by a truck carrying the generator for the lights. The noise and spectacle were everything you’d imagine, so incredible, and loads of atmospheric fun. After the parade, Karan dismounted the horse and walked down the entrance steps with fireworks surrounding him. All the events of Saturday and Sunday represent the introduction of bride and groom to each other, and their pathway towards joining the families together as well as their lives. 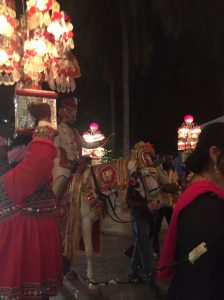 Karan on a horse

Monday morning began at six am and was the actual wedding ceremony that consisted of five separate ceremonies, each with religious significance. The early beginning was chosen so the final ceremony happened at an auspicious time. The ceremonies were beautiful with flowers everywhere, and again, everything was explained in three languages. 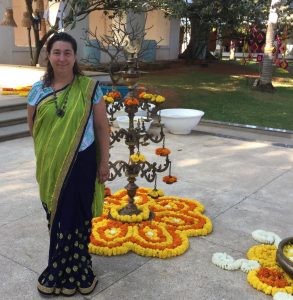 Photo of me in a sari.

The food was a massive highlight, with most meals served on banana leaves with a selection of different dishes that were mostly South Indian cuisine, with a few North Indian dishes as well. At every meal, we ended up seated beside different people, and everyone was so kind and helpful in explaining each dish and the origins of it. I wish I could remember everything they said – so much happened in a few days, it’s going to take me a long time to let it all sink in. 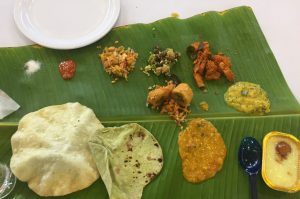 In summary, visiting Bangaluru was amazing, and being part of Karan’s wedding to Keerthi was such a privilege. I will definitely try and get back to India in the future.